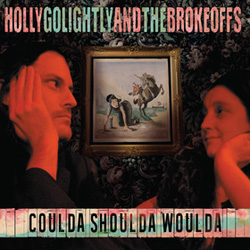 While Holly Golightly is frequently given the moniker of “the queen of UK garage rock,” or some derivation thereof, for awhile now her records have reflected a fairly broad musical palate. Continuing a prolific streak on par with that of her onetime partner in crime, Billy Childish, she put out a pair of full-lengths this year that are clearly distinct enough to warrant individual release. Slowtown Now, the first, comprises a collection of intimate mid-tempo blues ditties and torch songs that showcase the singer’s inclination to don the chanteuse cap, while Coulda Shoulda Woulda (Transdreamer Records), the follow-up recorded with her backing band the Brokeoffs, is more of a roots-rock gumbo with doses of country, rockabilly, gospel, and even a dash of Tom Waits-ian junkyard hoodoo.

Coulda Shoulda Woulda has an intense, robust live feel that allows the dual vocals of Golightly and main Brokeoff Lawyer Dave (also her paramour) to ring out. And while there might be stronger pure vocalists out there, Golightly displays a heartfelt confidence that is, as always, both gritty and seductively charming. Lyrically, the album touches on classic themes like sin, redemption, heaven, and Hell frequently found in country and gospel. Here, though, they’re cast through the lens of a confirmed skeptic, if not an outright atheist (“No Judgment Day” being a particularly stirring example), while “Apartment 34” taps into the Waits vibe and tells a nightmarish tale of redneck neighbors from Hell (maybe literally).

If this all sounds a bit heavy and a little dark, worry not, as one of the album’s standout tracks is a jaw-droppingly rousing string-band run-through of the Emperors’ boogaloo-soul shouter “Karate.” The album finishes up by calling bullshit on the whole Christmas charade with the wry, yet quite lovely, “Christmas Is a Lie,” a would-be holiday standard for a world in which Holly Golightly is our biggest pop star. We can all dream right?