The Pop Group
We Are Time and Cabinet of Curiosities 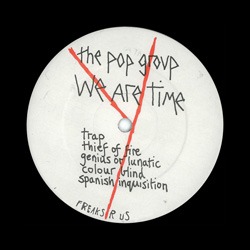 Before Shazam, which has never worked for me, and Siri, people used to regularly serenade record store employees with off-key, often unrecognizable interpretations of the music they were seeking. So I felt conspicuous coming to someone about a song that had been stuck in my head, when all I had was the main guitar bit and “something about good and evil?”

Amazingly, from those shards of info, it was determined that I meant The Pop Group’s “She Is Beyond Good and Evil,” the post-punk British band’s first 1979 single. Formed in Bristol in 1978, the band released two studio albums—1978’s Y and 1980’s For How Much Longer Do We Tolerate Mass Murder?—before breaking up in 1981, but the reach of The Pop Group far outlasted its brief life, influencing everyone from Nick Cave to the Minutemen to St. Vincent, who brought the song to a new audience during an appearance on Late Night with Jimmy Fallon. In fact, to listen to The Pop Group is to recognize the groundwork laid for a good many musical offshoots and movements that came later. Frontman Mark Stewart, guitarists Gareth Sager and John Waddington, bassist Dan Catsis and drummer Bruce Smith fused The Pop Group’s seminal sound by creatively mixing diverse styles, most notably funk-flavored guitars with remnants of punk and its raw DIY aesthetic and, of course, pop music. Over it all, Stewart’s distinctive voice—whether singing about politics or women—always flirted with gleeful madness. 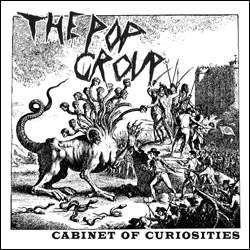 Now the Freaks R Us label has released a remastered reissue of We Are Time, a collection of live and early recordings originally released in 1981, and Cabinet of Curiosities, a new compilation of previously unreleased tracks and live performances. The tracks on the latter include the original version of “She Is Beyond God and Evil” (produced by Andy Mackay of Roxy Music), as well as “Where There’s a Will,” originally released as a split single with The Slits in 1980. This set shows the band’s wide range of styles: for example, the seemingly disparate harmonica, funky bass and pop chorus that the group weaves together for “Don’t Sell Your Dreams.” It also includes a few BBC John Peel session tracks, as well as live recordings that meander into jamming territory, such as “Abstract Heart,” recorded live in Brussels in 1978. Also among the highlights is a previously unreleased mix of “Amnesty Report III” that finds Stewart speaking over an avant garde musical melee.

Appropriately, this revisit shows how The Pop Group, who reunited in 2010, was ahead of its time, a prelude to so many sounds that would come late in the ’80s and even ’90s. The records capture the aural evolution of extreme ingenuity. Whether you’re a longtime fan or you somehow overlooked this legendary band, collectively these albums are a unique glimpse at the future of music as seen through the lens of the late ’70s early ’80s. Perhaps the title of one of the songs best sums up listening to The Pop Group: “Genius or Lunatic,” though the difference is negligible.