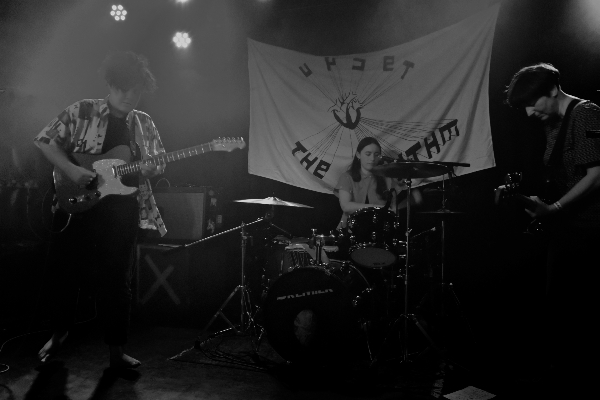 If you don’t go in for overpriced meals and cliched gestures, a good place to have spent Valentine’s Day this year would have been at The Lexington. That’s exactly what me and my amour did, opting for the double-bill from the Upset the Rhythm roster and a couple pre-show burgers and beers instead of Chateaubriand and bubbly.

The main draw was London trio Trash Kit, but up first was Handle, a Manchester trio that proved to be far more interesting than their nondescript name. The band created a minimalist groove accentuated by off-kilter rhythms and the yelped vocals of Leo Hermitt. Their set cracked with synaptic energy as they showed off tracks from their forthcoming debut, In Threes, due out next month on Upset the Rhythm. Among the hightlights was “Mhmm,” a cut that’s received some airplay on BBC 6—and with good reason; it’s gang vocals and propulsive bassline meshed for something both primal and modern and which hit all the right nerves.

Trash Kit came on next and announced their intention to play the entirety of their latest album, Horizon (one of the AR staff’s favorites from last year). However, it soon became clear that this wasn’t going to be an ordinary run through the record as the trio was joined by a violinist, a saxophonist, and a ragtag choir of half-a-dozen people or so. As such, the record’s 11 songs were rendered in full splendour; cuts like “Every Second” and “Sunset” were rambunctious send-ups, with the big band effectively sweeping the crowd up in its infectious clamor. But even when Trash Kit paired back to just its three core members for cuts like “Dislocate” and “Window,” it was hard not to be won over by the band’s mix of loping guitars and syncopated beats. I was reminded of seeing David Byrne and his much larger entourage not too long ago, and not just because frontwoman Rachel Aggs was barefoot onstage. Byrne and Aggs share an obvious love for Afropop and a natural ability for translating that predilection into beguiling, quirky songs.

Aggs is a natural bandleader and her wide grin seemed to capture the good vibe of the evening. The set ebbed and flowed not only with the flux of people onstage, but also with Aggs’ flurries of chiming guitar notes. The capacity crowd responded enthusiastically throughout and probably wouldn’t have minded a few more songs than just the one encore. Regardless, it was hard to have any complaints about the night’s performances.