The Pains of Being Pure at Heart
The Echo of Pleasure 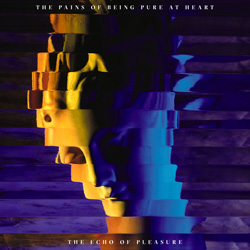 There’s one sure thing for which you have to give The Pains of Being Pure at Heart a great deal of credit: introducing the most buoyant parts of ’80s new wave and ’90s indie pop to listeners too young to experience it the first time around. For anyone born roughly after 1990, Pains were especially powerful, becoming a gateway drug of sorts to the bright parts of The Cure, The Smiths, New Order, and the Sarah Records catalog. On the band’s second and third albums, 2011’s Belong and 2014’s Days of Abandon, respectively, frontman Kip Berman and company paid homage to those trendsetters by crafting candy for the ears without teetering into the trite.

However, on The Echo of Pleasure, the band’s self-released fourth album, Berman has sadly made the Pains sound more homogenized. Most of the album’s issues can be attributed to a persistent lack of balance and earnestness. Despite the energy exerted, “My Only,” “Anymore,” “The Garrett,” and “When I Dance With You” make for one of the dullest album sides ever recorded. The general love-interest “you” is already a well-worn lyrical trope, but the Pains manage to shred it to rags in just four songs. Part of this could have been alleviated with some simple counterbalance; where Belong had “Even in Dreams” alongside “Heart in Your Heartbreak,” Echo is largely uninspired shine without any other emotional tone to make that overt brightness fulfilling.

The monotony of Echo does break momentarily as Jen Goma of A Sunny Day in Glasgow thankfully helps out, handling vocals on the album’s lone bright spot, “So True.” The cut’s equal parts modern pop anthem and ‘80s dance classic; it’s practically tailored to Chvrches and New Order fans alike. It’s a direction that doesn’t deviate from the Pains formula while still sounding unique. The song leaves one wondering what could have been if only the Pains could have made more of Echo in this vein and not the bore that it is.