Not every lyric on Benji is about death; Mark Kozelek has also penned heartfelt tributes to his mother and father. But the songs that are about tragedy overflow with unforced sadness. “Pray for Newton” is not an ironic title. But neither is the title of “Richard Ramirez Died Today of Natural Causes” what the song is about. It’s not just the titular Ramirez passing on, it’s his victims, and James Gandolfini, and Kozelek’s unnamed family member, and a couple in an airplane crash, and Elvis, and Ronald Reagan, and so on. Death is everywhere, and that’s just one song. Kozelek disguises nothing and looks everyone right in the eye. Take “Dogs,” on which he details the early sexual experiences of the narrator (himself?) in straightforward detail. It’s practically a list, an accumulation of quotidian deflowerings. Elsewhere he complains about his nagging prostate, his bad back, getting old, and having to pee a lot. These are no metaphors. Kozelek’s plainspoken manner is his secret weapon. He doesn’t tell you how to feel about these distant losses. You’re only human if it drags you down, and more than just a little bit. MS

While Johnny Marr established himself decades ago as a legendary guitar player in The Smiths, he really came into his own as a solo artist last year with The Messenger, a nearly flawless record that left many wondering why he’d waited so long to take up the mic and move center stage. This year’s follow-up, Playland, shows that Marr was just getting started; it seems that catchy pop tunes flow from him nearly as easily as the unforgettable guitar hooks did. That said, the jangly signature Smiths sound doesn’t appear very often in his new material, save for a few hints in tracks like “Back in the Box” and “Little King.” “Candidate,” for example, sounds a little like a lost song from The Church, while guitar-driven “Dynamo” builds into a soaring track. Meanwhile, the standout single, “Easy Money,” delivers a message about material greed and an irresistible melody. Does this mean no price will ensure a Smiths reunion? No matter. Marr’s new solo material and energetic live performances (when he often incorporates classics like “Panic” and “How Soon Is Now?” into the set) are enough. JR

#8
Nots
We Are Nots
Goner

The internet has done an odd thing to the idea of discovering your influences. These days if you want to create menacing synth-punk or Rough Trade–inspired post-punk or ’90s-style grrl punk, the  blueprints and schematics are all out there for the taking. Once you’ve learned the rudiments of guitar and drums, essentially all you have to do is press a button. Still, it’s the bands who give the instructions a quick glance and then wing it that tend to make the most interesting and vital records. Case in point: Memphis’s Nots. Recently reconfigured as a quartet and with newly added synths, the band doesn’t necessarily reinvent the wheel on its debut LP, We Are Nots, which, it should be noted, comes on the heels of a pair of scorching singles as a trio. But their particular construction of agitated guitars, spiky rhythms, pounding synths, and bellicose vocals hits with such vigor and swagger, it feels fresh and completely appropriate for right now. NK

Following a building buzz—especially following 2013 supporting tour dates with the Breeders—Cincinnati’s Tweens released their self-titled debut earlier this year. Bridget Battle, Peyton Copes and Jerri Queen exhibit the kind of tightness and chemistry throughout the record of  “trash pop” that you’d expect from a more mature band. Tweens’ collection of tunes melds punk defiance and a lo-fi attitude with melodic pop choruses and catchy hooks that hint at influences ranging from doo-wop to the Donnas. “Be Mean,” in which Battle asserts a sweet guy is quickly securing himself a place in the friend zone, brims with youthful vigor and irreverence. Battle’s lyrics are full of bad-girl swagger, which at times can be empowering, while in other instances is even self-aware and vulnerable. As on “Bored in This City,” the Tweens might be artfully bored, but their debut proves they’re anything but boring. JR

The Crookes’ sophomore album, Hold Fast, was criminally overlooked, but fortunately the Sheffield quartet has returned sooner than later with a follow-up, Soapbox. Like its predecessor, the record is characterized by snazzy pop that occupies the middle ground between the territories tread by The Housemartins and Gene. Singer George Waite leads the way, his voice a highly tuned instrument that traipses atop each melody with acrobatic glee. Musically, the record is a smart mix of jangly guitar riffs and big backbeats that the Brits seem to have cornered the market on over the past few decades. Ever after many regular listens since its release this past spring, the album’s charms have yet to diminish. SS

Mac DeMarco is a self-proclaimed “scumbag,” a rube, a free spirit. His live shows have been known to devolve into blue jokes and nudity, and he describes what he does as “jizz jazz.” All of this deprecation is quite contrary to the 24 year old wunderkind’s effortless guitar playing and lazily spun, yet instantly classic, songs. Riding a wonky wave of hazy psychedelia and slacker folk, Salad Days more often than not reveals a beautifully stoned genius. It’s an album that should satiate the Goldilocks in all of us, a “just right” middle ground that isn’t as leftfield as say Ariel Pink or bland and devoid of emotion as Real Estate. While the “pepperoni playboy” seems content to write aloof motifs that recall ’70s soft rock and precious indie, underneath the oversized shirts and goofy, gap-toothed grin, this is likely part of some twisted master plan that will blossom even further in years to come. KJE

#4
Angel Olsen
Burn Your Fire for No Witness
Jagjaguwar

The sophomore album from this crimson-throated Missouri whippoorwill at turns evokes the ghosts of Hank Williams and Roy Orbison, while also sounding decidedly modern. Songs like the opening “Unfucktheworld” are lent an added poignancy by being stripped to just the barest of essentials, but Olsen also at other moments wraps her ruminations in fuzzy coatings of hell-hath-no-fury-like-a-woman vitriol that adds to the record’s cumulative potency. The album is quiet and thunderous, pensive and cathartic, and simmers with a bellyfire that seems destined to never go out. In short, Burn Your Fire for No Witness is one for the ages. SS

If Aphex Twin didn’t exist, there wouldn’t be anyone skewed enough to create him. The artist also known by the taxman as Richard D. James has long been an enigmatic figure in electronic music, partially due to his long standing habit of half truths in interviews and his contrary approach to his music. So it seemed not that surprising that he used a series of unconventional approaches in announcing Syro, his first proper album in 13 years, including a blimp, worldwide graffiti, and the Deep Web. But what was surprising, especially considering that James loves being abrasive, is how poppy Syro is. He hasn’t gone all festival neon hula hoop crowd, but there are some straight-up dancefloor jams. And where on other albums James would also showcase the serious composer, here he plays to his fun side. He (as always) pulls from a variety of styles, but there’s not the frantic, disorientation in which James frequently traffics. It’s strange by not being so strange, which is somehow completely fitting. DSH 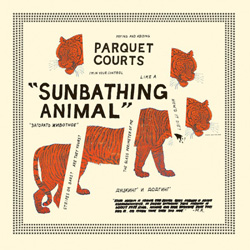 In dishing out as much pointed riffage and wit on Sunbathing Animal as ever, Parquet Courts have produced a true post-punk delicacy for 2014. Between the record’s stoner-paced rambling (“Instant Disassembly,” “Dear Ramona,” among others) and hoedown bangers (“Sunbathing Animal,” “Bodies,” also among others), this New York–based crew put together a rock record that lends requires multiple listens to really unfold. Spinning this record a few extra times is especially important, too, because as co-frontman Austin Brown has said, Sunbathing Animal emphasized lyrics more than ever. So even though the music comes in either jaunty or depressing form, other frontman and vocalist Andrew Savage is continually articulate, and furthermore, a born storyteller. Suffice to say, Parquet Courts have crafted a set of songs that hook in more ways than just sonically. It can be winding sometimes, but it’s never disorienting. ML

In hindsight, it’s no surprise that the most straight-up enjoyable rap music record in a decade was made by a couple of hip-hop anti-heroes. Killer Mike and El-P—tag-team champs, rap vigilantes—firing off the big guns just for kicks. The dynamite duo had a blast making this record, venting timeless, outsider griefs and showing off for the benefit of no one but themselves. The pair seems intent on making sure that every single line is worth quoting on your Twitter feed, every lyric worth memorizing to impress your friends. And just when the over-stuffed sentences and scorched earth production threaten to go right over your head, they flip the script and aim straight for your crotch. It’s the first El-P project with more pro wrestling references than four syllable words, more sex raps than sci-fi fantasias. Run the Jewels defy all expectations, kiss exactly zero asses, completely level the playing field, and ride high into the sunset, never to be underestimated again. MS