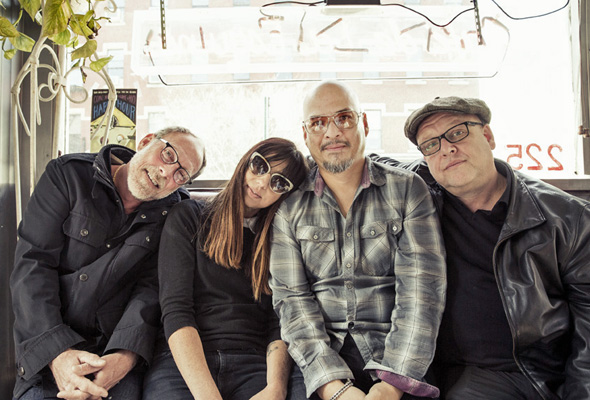 My favorite moment in talking with fabled Pixies axeman Joey Santiago occurs in the first few minutes of our conversation, when I can hear him turn to his teenage daughter in response to a question about whether he likes the band’s new album, Head Carrier. “Are you annoyed that I listen to it a lot?” Santiago asks her as he drives. “No,” she responds, affirming that she’s listened to all of the band’s albums.“For me, it is the catchiest.”

The highly anticipated record is indeed a strong return to form for a group whose output in the late ’80s and early ’90s is among indie rock’s most revered catalogs. (Speaking of the band’s billing below Radiohead at Coachella in 2004, Thom Yorke bemoaned, “The Pixies opening for us is like The Beatles opening for us. I won’t allow it.”) Head Carrier is the second collection of songs the band has released since bassist Kim Deal (also of The Breeders) left the band in 2013 and its first “proper” album since reconvening in 2004 after an 11-year hiatus. (Several previously released EPs of new music were combined as Indie Cindy in 2014.) Produced by Tom Dalgety, it is an alternately elegant and thunderous affair, featuring some of the best songs lead singer Black Francis has written in years and a notably strong performance from Paz Lenchantin, who replaces Deal on bass and backup vocals.

I caught up with Santiago about a month ahead of the album’s September 30 release date and a couple weeks before the band announced that the guitarist had checked into a rehabilitation facility for drug and alcohol issues. During our talk, there was no indication of anything amiss, and Santiago seemed happy to discuss the new tracks, the Pixies’ storied legacy, and Lenchantin’s place within it.

Joey Santiago: Do I like it? I love it! I listen to it a lot. It sounds retro and poppy, kind of like a Doolittle album.

Do you think this is an extension of the Pixies’ sounds? I say “sounds” because I don’t think all your records sound the same. Or is this new territory?

JS: On this one, we pretty much embraced the past. That’s what I think we wanted to do, and Tom was privy to that. He wanted to make it sound very “Pixies-ish,” and I also purposefully did the old style again.

What are your favorite songs?

JS: I like “Head Carrier,” “Classic Masher,” “Bel Esprit,” “All I Think About Now,” “All the Saints”—basically a lot of them.

“Head Carrier” reminds me of “Bone Machine.” I don’t know if I’m off-base with that—something about the guitar on that track.

JS: I guess I could see that. Everything has its past DNA on this record. You can definitely identify it as the Pixies. We definitely embraced the past with this one. I gave up and said, “Okay, I’ll do what I usually do.”

JS: (Laughing) What I usually do—make it sound like the Pixies! It just became that way. I think I’m allowed to rip off myself.

Absolutely. I read somewhere that Charles typically writes songs and then gives them to you to “pixify.” Is that what you mean?

I read in the press materials that David Lovering said some of the Indie Cindy songs “hurt him” and this one made him “very, very happy.” What do you think of this record compared to Indie Cindy?

JS: Well, Kim leaving was devastating, and on Indie Cindy we explored the future and something that was different. It’s good that Indie Cindy sounds like that, like a history of a team member leaving. It should sound like that. It’s almost like an homage, whereas Head Carrier sounds like we found someone that’s part of our DNA. As Charles would say, Paz is part of the Pixies. She’s been with us for three years, and she’s a weirdo just like us. She’s perfect for us and you could tell that we found someone that relates to us. We’re very, very glad she’s there. Otherwise, we would not have asked her to join the band.

What does she bring to the band that’s different?

JS: Her bass playing is her own style, and so are her vocals. She gives a lot of great suggestions—a lot of them—and none of them have failed. She’ll make a suggestion, and we’ll go, “Fuck, she’s right again.”

In the songwriting? Before you get to the studio?

JS: Stacking the sandwich, as we like to call it. She’s very instrumental in that.

Personality question: what’s one thing about Paz that might surprise people?

JS: She’s hilarious. Her and I have this… what would you call it? We challenge ourselves to make the stupidest joke. We try to out-do stupid with each other.

Can you remember any?

JS: There’s a lot of them. Once we were leaving a festival and we noticed that Arcade Fire had their own washing machine and dryer, and she said, “Oh, it’s the arcade dryer.” That’s my favorite one.

What about Charles? Anything surprising about him? Do you have a joke-off as well?

JS: Charles has a dry, dry, dry sense of humor. And he understands my humor. I’ve got a strange sense of humor, but when I say something, he’ll translate it for everyone.

JS: Mr. Stoic. He’s funny too, and also he’s very knowledgeable about nature and animals. To me, I see a squirrel and it’s just a squirrel. If he was here, he could explain its behavior, what it’s doing now, and interesting facts about that animal. He just loves nature and little critters and animals.

In terms of creating this record, did you feel any more pressure due to the legacy that you guys have and the expectations from people?

JS: No, not at all. We kind of subconsciously knew that we were going to embrace the past. Also, once you get into the studio, once the record button is on, you just get to work. It’s the only time we get to entertain ourselves. Our job is to entertain people, but when we’re in the studio, it’s our turn to get entertained. This time around, it was all about the Pixies, and we didn’t feel any pressure at all because we worked hard at it, and if you work hard at something like that, it’s going to come out good.

You guys worked with a new producer, and he reportedly nixed some stuff. How many of those songs were cut? How many aren’t we hearing?

JS: I think there are five “B-sides.” We were surprised that he chose some of them as the B-sides, but we totally trust him. We had a few songs we didn’t even bother recording because he said they were “pedestrian.” He said if we were making a Creedence Clearwater album, then yes, we could do that. We love CCR, but his perspective is that he knows what the Pixies are all about. He seems to have studied it.

I’m surprised to hear CCR. To hear you guys play that style would be kind of interesting.

JS: Yeah, it would be. But thanks to Tom we kind of veered away from it.

Are there any Pixies songs you wish you hadn’t done?
JS: You would be surprised that I am not particularly fond of “Monkey Gone to Heaven.”

Oh yeah? Is that because of how much you’ve played it and how popular it became or have you always not liked that song?

What do you think is the best Pixies album?

JS: It’s between Surfer Rosa and Doolittle. I would say Surfer Rosa is a good introduction to us, what the Pixies are and where we started.

Is there a song you’ve ever wanted the Pixies to cover?

JS: Right now I am into this song by Canned Heat called “Poor Moon.” I think we could do it some justice. The backing vocals are very “us” too, so I think we could pull it off. It’s a great song. It’s the most esoteric one I’ve heard from Canned Heat.

I was reading an article in The Quietus, I think, and you were talking about some of your favorite records: Hendrix, the Beatles, Lou Reed, Bowie, and so on. Do you recognize the Pixies to be of that iconic caliber?

JS: “Iconic” in a way that we’ve managed to luckily run upon our own style. It just became very magical. We’re very identifiable and thankfully pretty good at the identifiable. It doesn’t warrant “suckiness.”

Do you hear your influence in other bands today?

JS: People tell me about something, and I get it. That’s the stupid problem I had with embracing the past with Head Carrier, ripping off that sound. But then I say, “Hold on a second, I made that shit up. I can rip off myself!”