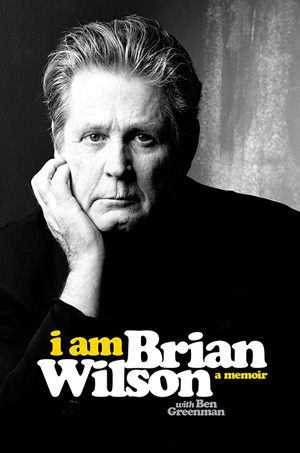 Thanks in large part to the long-running touring version of the band led by Mike Love, the Beach Boys’ reputation as the musical embodiment of all-American fun remains firmly intact in 2016. But a more complex version of both the band’s history and its music has taken shape over the years as well. Tales of family strife, drug abuse, mental illness, and violence have come to shroud the more pleasant, oversimplified image of a fun-in-the-sun rock & roll group. Yet, with this troubling take on the band has also come a more mature appreciation of its music as sublime, expertly crafted pop that represents the pinnacle of the form. At the heart of these contrasting narratives sits Brian Wilson, the band’s fragile creative mastermind.

I Am Brian Wilson: A Memoir (Da Capo Press) is the songwriter’s first memoir to which he has given his full support (he disowned his 1991 autobiography, Wouldn’t It Be Nice, believed to have been written under the direction of Wilson’s controversial therapist, Eugene Landy), and in it we find a contemplative soul trying to make sense of the cacophony of events—some joyful, others horrific—that make up the story of the Beach Boys and out of which emerged such remarkable music.

Wilson’s genius is a joining of an almost spiritual commitment to the artistic process with a hard-nosed application of pure talent. And in I Am Brian Wilson, we witness both in action. His recollections of recording classics such “God Only Knows” and “Wouldn’t It Be Nice” show an artist seemingly in awe of the music before him, yet willing to do whatever is necessary in service of the song. He respects all of the musicians around him, but demands their very best.

It’s well-known that Wilson insisted on staying true to his vision despite reservations from seemingly everyone around him—from record execs to his father to his band to even his own better instincts. Yet while his personal demons fueled him to a certain degree (to the extent that music aided in his escape from them), his famed doggedness in the studio—from insisting on myriad re-takes to, at one point, making everyone in the studio wear fire helmets—is shown here as more the product of simply not being able to deny the beautiful music in his head than the idiosyncrasies of a troubled artist. (The reality was likely a bit of both.)

This frantic perfectionism would also prove to be one source of his many mental breakdowns. He writes of how SMiLE was a debilitating weight that would haunt him emotionally, psychologically, and creatively for decades; and the record’s final unveiling in 2004 would prove to be the creative unburdening he had sought for nearly 40 years. In fact, to hear Wilson discuss the degree to which the album plagued him is almost enough to make any Beach Boys fan who had clamored for its release feel a little guilty.

It shouldn’t come as a surprise that Wilson’s memory is a bit spotty, and he admits this throughout. Thus, much of the book is impressionistic in its recollections. There are some notable anecdotes, though, that should satisfy fans, including his near-miss appearance on the Phil Spector Christmas album, an impromptu solo concert in an LA music shop, and an excellent (though ultimately harmless) swipe at Don Henley. Wilson’s tone, sometimes even when discussing the most difficult periods of his life, is almost childlike in its sense of everlasting wonder and bemusement, and when he drops in the rare line of pure confidence or braggadocio it’s eminently charming. He’s forthright about his shortcomings, and when discussing the death of his father, and later Landy, he is genuinely insightful without claiming any sort of profound understanding of life’s mysteries.

Much credit should be given to coauthor Ben Greenman for not only piecing together a solid, coherent narrative from Wilson’s chaotic life, but also for creating an unmistakable voice that truly guides the book above any particular narrative thread or theme. As with Wilson’s music, all you need to do is listen to that voice and you’ll know all you need to about this delicate, astonishingly talented soul. There’s no real score-settling here, and while Wilson does seem to want to set the record straight on a few issues, his memoir is ultimately about the inner journey he’s been on since the Beach Boys first went surfing over a half century ago. We’re left with the notion that despite moments of genuine darkness, it is through music that Brian has found the warmth of the sun.