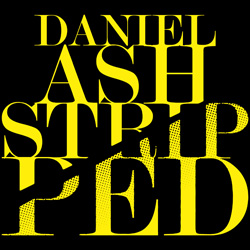 If you didn’t know better, it would probably be safe to assume, judging from the title, that the new solo album from Daniel Ash is a mellow, “stripped-down” affair. But rather than some acoustically rendered resting of the laurels, Stripped (Main Man Records) is an invigorated reworking of a number of selections from the musician’s Bauhaus, Tones on Tail, and Love and Rockets songbooks. And while most fans would have probably preferred an album’s worth of new material (it’s been ages since such a thing), Ash has managed to justify the revisionist approach, expanding upon his existing work without tarnishing it in the process.

Stripped leads off with “So Alive,” perhaps Ash’s best known song; the Love and Rockets track made it to number three on the Billboard pop chart in 1989. Working with the song’s original producer, John Fryer, Ash has retained the song’s somnolent groove while interjecting swathes of low frequency gurgles and other electro touches. Ash, of course, is no stranger to electronic music, having dabbled with such sounds on Love and Rockets records like Hot Trip to Heaven and Lift, albums that also had the distinction of alienating a portion of the band’s fanbase. Perhaps Ash was ahead of his time in those days, but now the melding of styles seems completely natural. Much of the record takes a similar approach. On the subsequent “Love Me,” another Love and Rockets track, this time from the band’s second album, Express, he grafts a techno beat onto the candlelit-pop lament that renders it almost danceable. Meanwhile, a song that was already danceable, Tones on Tail’s “OK, This Is the Pops,” has its fuzzy bassline fattened, while an added piano melody lends a vaguely melancholic, radiant counterpoint.

The album does have one new song, “Come On,” a rant at the 21st century that despite it’s techno veneer, most closely resembles Ash’s output with Tones on Tail, “There’s Only One,” in particular. Interestingly enough it’s a reworking of that song that follows, perhaps to emphasize the similarities. What’s underscored, though, is that, lacking the nuanced atmospherics of Ash’s past work, the new cut doesn’t quite measure up. However, it’s not a complete throwaway and melds into the overall vibe of the record. Stripped triumphs at every turn by defying expectations: it is neither an acoustic cash grab or the last hurrah of an artist past his prime. Instead, Ash has made a collection of reinterpretations that satisfy his creative itch and our want for the new while at the same time honoring the originals.